The Commonplace Book compiled by Lady Anne Southwell during the end of the C16 beginning of C17 has over recent years become the focus of interest amongst some academics. A C16 equivalent of the modern Scrapbook, the pieces  mix and match, juxtaposing different pieces: poems, (of hers and others), letters, inventories of books, aphorisms, receipts and scriptural commentary. Southwell’s voice is distinctive and outspoken, given that the prevailing mode for women writers of her day was passive and demure. Her poem on marriage, taken from her commonplace book, with its implicit critique of the way that men attempted to manipulate gender roles, seems a premonition of that of Mary Chudleigh’s ‘To the Ladies’, written more than fifty years after. Was Mary Chudleigh aware of the work of her predecessor, who also came from her home-county?


Anne Lady Southwell was born some twenty years after Anne Dowriche;[i] Anne Southwell’s home was in Cornworthy, a parish spread over the lengths of two opposite valleys, which is reached via a trip long, darkly tree-shaded and narrow lanes in the depths of the South Hams, which are noteworthy even amongst Devon standards. These are part of a tangled network edging the woods of the west side of the Dart. This district still projects an atmospheric sense of ancient origins and ‘back of beyond-ness’. Perhaps this is because there is still a gateway from the Augustinian priory prominent in a field just west of and overlooking the village; there are also the remains of a chapel. Cornworthy Priory was founded here between 1205 and 1238 and must have been of great importance in the parish. Although it was a small house there is evidence of girls receiving education there. Anne’s paternal grandfather, Edward Harris was granted the site at the beginning of Elizabeth’s reign, circa 1559, some while after the dissolution of the religious houses and afterwards the Harris family retained its ownership of Court Prior for centuries. 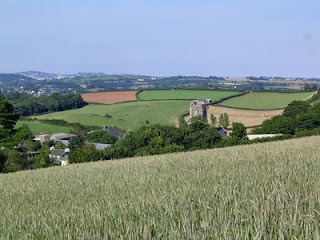 Sir Thomas Harris, Anne’s father, from Cornworthy Court, was an MP and Sergeant at Law at the Middle Temple. Elizabeth Pomeroy, Anne’s mother, was from the prominent Pomeroy family of Berry Pomeroy , and may have been daughter of Thomas Pomeroy.  If so, she was probably first cousin to Anne Dowriche. If Elizabeth Pomeroy was Thomas' daughter, her birth into that family must have occurred at a time when the family’s fortune was changing: providence was against them and after Thomas became embroiled in the Sampford Courtenay Rebellion, in 1549, they lost Berry Pomeroy Castle; although allegedly they were able to invest in other lands and in any case it seems the family transferred to Sandridge in Stoke Gabriel.
Anne Harris Southwell had three siblings; this is known from the Cornworthy Monument to Thomas Harris and his family, which is at the church. Both her brother Edward and her husband Thomas Southwell spent time in Munster: Southwell crossed to Poulnelong Castle early in their marriage and became a member of the council at Munster, whereas Edward became Chief Justice there, as well as 2nd Justice of the King’s bench. 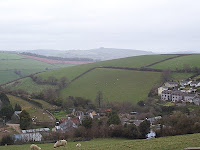 Lady Anne Southwell died in 1636, in Acton, the home of her second marriage, but her burial appears to have been at her childhood home at Cornworthy. Certainly she is included in the family effigy at Cornworthy Church, in the Chancel, with the monument to Sir Thomas Harris and his wife and four children. Unfortunately, when I visited the church was locked, so no original photo to display here! 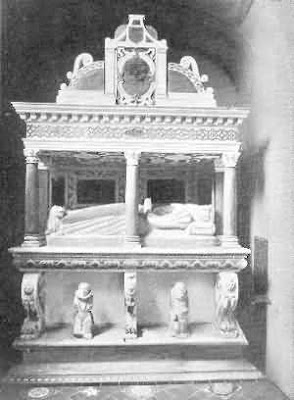 'On Such A Day'; A Poet has her Secrets

I am currently studying for a Masters at the university of Sheffield in Literature. I'm currently doing one of my essays on Mary Elizabeth Coleridge and Elizabeth Barret Browning. I have just finished reading your article, 'On Such a Day’; A Poet has her Secrets; Mary Coleridge & Halsdon. I just wanted to say it was a fascinating read, and really resourceful in greater understanding the relationship between Browning and Coleridge. Jack Sturman